This article originally appeared in the San Diego Reader on April 14, 2014. It was written by Sarah Sapeda.

Work on the thoroughfare connecting SR-94 and Balboa Park is set to include restriping the road, widening sidewalks, and adding marked bike lanes. Crews also plan to replace water mains and add reverse-angle parking spots, which motorists will have to back into.

The “25th Street Renaissance Project” includes the stretch between B and E streets, according to city officials. Mayor Kevin Faulconer said the push to rebuild San Diego’s neighborhoods had begun and pledged $22 million of the $35 million in new revenue anticipated in his proposed budget for next year (which he plans to detail today, April 14) toward the city’s infrastructure needs.

The city reportedly plans to spend about $300 million on capital improvements across the city, which will include repairs to streets and sidewalks, park improvements, streetlights, storm-drain maintenance, and work on fire stations and other city facilities, Faulconer said.

“The goal of all of these projects is to make San Diego a better place to live and to work — and the 25th Street Renaissance Project fits that bill,” Faulconer said. “Whether you’re traveling by foot, bike, or car, the changes that are being made here are going to make it safer and a more accessible route for everyone.”

Faulconer said the city has been rightfully criticized in the past for poorly coordinating infrastructure projects. For instance, the city would pave a street and then tear it up a couple months later for a sewer or water project. This project would be different, he said. The area would soon be due for a water-main replacement, so that project was consolidated with the other planned improvements.

The project will be funded using the San Diego Association of Governments’ TransNet fund and water funds, according to city officials.

From the Official Press Release of the City of San Diego:

On April 8, 2014 Mayor Kevin Faulconer, Council President Todd Gloria and City of San Diego officials ceremoniously broke ground on the 25th Street Renaissance Project at the corner of B and 25th Streets.

“The push to rebuild San Diego’s neighborhoods has begun and projects like this that widen sidewalks and install bike lanes are going to be the future,” Faulconer added.

Todd Gloria agreed saying, “This project brings active transportation improvements to the neighborhood and will allow for safer biking and walking along a key corridor.”

The project will make the Golden Hill neighborhood safer and more accessible for residents and businesses. The project’s improvements include:

The 25th Street Renaissance Project improvements focus on calming traffic, creating multi-modal forms of transportation, and making infrastructure upgrades. The project was funded from TransNet and Water Funds. Mayor Faulconer concluded with “this is a $1.7 million dollar neighborhood infrastructure improvement for this community.” 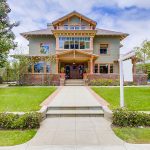 Next:
An Architectural Pedigree, Rich in San Diego History