This article was originally published in the San Diego Reader on January 29, 2013, and was written by Leorah Gavidor.

Major renovation is under way at 2692 C Street, the address that was previously home to George Washington Station, the post office that served Golden Hill from the ’60s until it closed permanently in February 2011.

The new property owner (Fancy Pants @ the Post, LLC) has improved the landscaping, gutted the building, and added a multistory structure on the back of the lot.

When it is complete, the new construction will include four single-family residences. The new apartments, called “Fancylofts,” will be approximately 1200-square-feet each, with three bedrooms and two baths.

According to real estate website Zillow, the units will be available for occupation in mid to late February. According to an ad on Craigslist, the residences will rent for between $2550 and $3295 per month.

The parcel was sold in April 2012 for $460,000 by owner Renee Park, who had been leasing it to the United States Postal Service. 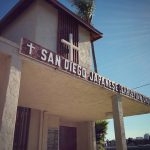 Next:
A Home Built by City-Designated Master Builders