The following article was originally published in the Neighborhood Reporter and written by Susan Bugbee in 1988. The Fraternal Grove discussed is now widely known as the Bennington Memorial Oak Grove. The Grove is currently being refurbished by the California Conservation Corps in association with the City of San Diego and Balboa Park.

Not unlike the tree planting efforts that took place in Golden Hill recently, an idea emerged early in 1905 to commemorate the departed members of fraternal societies with an arbor day celebration in Balboa Park (then called just “City Park”). San Diego’s Fraternal Grove society, comprised of 29 local lodges, originated the plan, which soon gained interest throughout the state. At their state-wide meeting held in Watsonville, California, the Foresters of America voted to take an active part in the tree planting and celebration scheduled for Thanksgiving Day. Grand Chief Ranger Charles A. Root, of Sacramento, threw his support behind the San Diego delegation and promised to provide active assistance and attend the occasion himself.

The Foresters received ten saplings from Sherwood Forest and intended to have them planted in parks along the Pacific coast. One was destined for San Diego. Local lodges compiled lists of deceased members in preparation for the memorable occasion. Plans evolved to have a miniature counterpart of England’s Sherwood Forest with the theme for the festivities centered on Robin Hood and his band of merry men who delighted in living the free and fearless life apart from authority during the thirteenth century.

Several months after the inception of the “Fraternal Grove” idea, the gunboat Bennington exploded in San Diego harbor. Considered the worst disaster since the battleship Maine blew up in Havana harbor, 65 men died. Within a few days, the directors of the Fraternal Grove society had added the Bennington casualties to the list of the deceased who would have a tree planted in their name. This brought the total number of trees to 382.

One resident, Joseph Jessop, of Coronado, born near Sherwood Forest, England, delighted San Diego Union readers with his account of Robin Hood. Robin reigned “like an independent sovereign, robbing fat bishops and high priest, or whoever came in his way who had plenty of money,” but he never molested the poor; on the contrary, he gave special care to the widow and orphan.

In October 1905, the Park Commission approved the newly proposed Golden Hill Boulevard as site of the grove. The arbor would line the new boulevard from Golden Hill through the park to Pound Canyon. The layout placed 65 trees commemorated to the Bennington heroes at the center of the grove with the surrounding ones dedicated to the fraternal order. Digging of the holes for planting began a full month before the ceremony.

The young oak brought to San Diego grew from an acorn borne from the famous 800-year-old “Robin Hood Larder Oak,” standing three miles from the ancient castle of Nottingham. The parent oak allegedly contained a large cavity which could disguise the giant frame of little John and corpulent form of Friar Tuck comfortably and simultaneously. It supposedly also doubled as a safety deposit box and cold storage room, housing persons or loot as necessary.

In anticipation of the upcoming ceremonies, George Magly, president of the Fraternal Grove Society in San Diego, wrote: “If the long-departed are permitted to see what goes on in this world, how strange and pleasant to Robin Hood and Little John, to Allan-a-Dale, to Friar Tuck and (Little) Much, the miller’s son, and all the band will be the scene on next Thanksgiving morn in the city park, when the sapling oak from the grand old Sherwood Forest shall start its career among the native trees surrounding it, and who can predict the many gatherings of families, in the years to come, that will assemble under its branches and thick foliage, to enjoy a short season of outing, which we of the present day shall prepare for them?”

Three days prior to Thanksgiving, the larder oak arrived, just in time to be planted under the direction of Park commissioners Marston and Moran. By November 29, the day before Thanksgiving, over half of the 398 trees stood waiting in place for the ceremonies to begin.

The program of November 30, 1905, began promptly at 9 in the morning in the newly planted arbor. School children arrived at the grove and placed a small flag at the base of each tree. Hon. Charles A. Root eloquently delivered the Dedication. Then presentation of the oak sapling from Sherwood Forest followed. W.H. Donahue of Pleasanton, California, who was instrumental in bringing the saplings to the West Coast three years before, gave the presentation speech.

The celebration moved to the downtown plaza, where, at 10 am, folks were entertained by the Woodmen of the World Band, playing atop a bandstand decorated to look like a forest. The finale was a John Phillip Sousa march. Songs were performed by the Concordia Turn Verein. The most solemn part of the ceremony entailed reading deceased lodge members’ names. For each name mentioned, a school-aged child dropped a rose or carnation into a basket. With rain predicted, alternative indoor plans were made, but no rain came and the occasion left pleasant and patriotic memories with the attendees. George Magley spoke of the larder oak as a “foreigner” but assured the audience that “like other immigrants it would soon become Americanized and live in harmony with its neighbors.”

Most of the trees obtained from Sherwood Forest found their way to San Francisco’s Golden Gate Park. Others were planted in Los Angeles and Pleasanton, California, and some found root in the states of Washington and Oregon.

But where is the tree with royal background, around which the descendents of Robin Fitzsooth, Earl of Huntingdon (AKA Robin Hood), or the seven-foot-tall Reginald Greenleaf (AKA Little John), Will Scarlet, Allen-a-Dale, and sweet Maid Marion played before the sapling was uprooted and bound for San Diego? With changes constantly being proposed and implemented in the park, it is easy to see that planners have lost sight of the “public good” our forefathers intended. There are no longer 382 trees lining the old “Golden Hill Boulevard,” now known as 26th Street, as it descends to the traffic light at the intersection of Pershing and Florida. But off to your left just before the Operations Center is the remains of the grove. Although it isn’t easy to know one species of oak from another, the remnants of this significant historic grove should be protected.

Rumor in the little forest is that the whole of Balboa Park is under the watchful eye of a small band of grass roots horticulturists (dressed in Lincoln green, maybe?) and, alas, it is suspected that the Balboa Park plan has been contrived by the Sheriff of Nottingham. 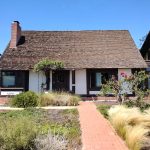